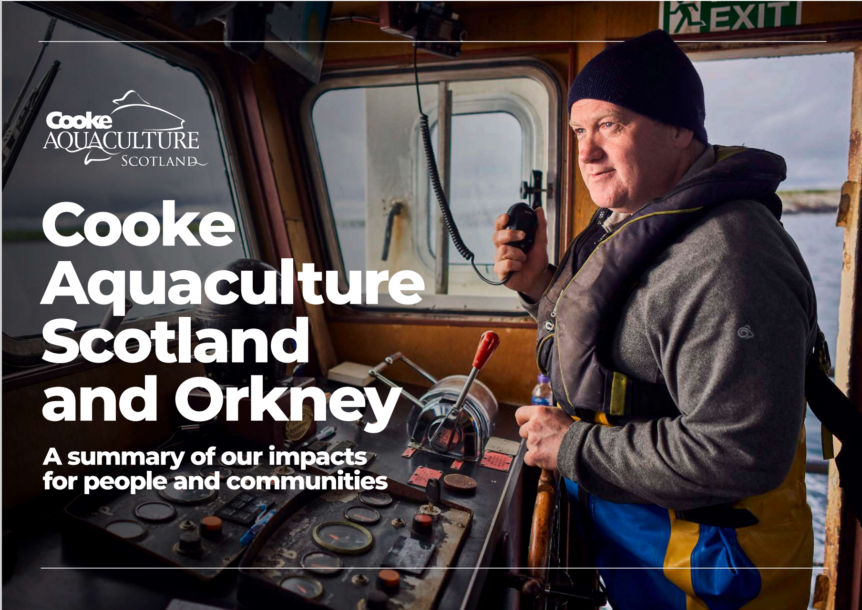 Kirkwall, Scotland, UK – August 17, 2022 – As one of the largest employers in Orkney and Northern Isles, Cooke Aquaculture Scotland has released an economic impact report showing that the company’s salmon farming operations are having a significant positive social impact on their employees and community viability of the remote islands. The report is titled Cooke Aquaculture Scotland and Orkney: A summary of our impacts for people and communities.

Including bonus and overtime payments during period 2020-21, a striking fact from the report notes that Cooke’s skilled, permanent jobs, are paying 24.8% more than the Orkney average and 8.6% above the average for Scotland.

All the company’s local investment is having real-life impacts in Orkney and Northern Isles:

“When we first came to Orkney in 2014, as a family-owned company we understood immediately that the jobs we provided mattered – really mattered. They keep people and their families on the islands, attract new people to live here, and help businesses to thrive and schools to stay open,” said Joel Richardson, Vice President of Public Relations for Cooke Aquaculture Scotland. “We have never forgotten that and now we employ 122 people in Orkney, 51 of them on our farms. That includes 25 new jobs created in 2016-2021, all of them helping to keep remote communities viable.”

Orkney salmon farming sites tend to employ 4-5 people each in full-time equivalent (FTE) jobs. For the remote islands especially, a new farm can be transformational in terms of tackling local depopulation. As the only salmon farmer in Orkney to process farmed fish locally, Cooke employs over 41 people at their processing and packing facility in Kirkwall.

“In Westray for example, we now provide over 23 local jobs – up from 12 in 2016, with each job giving the opportunity for people and families to stay on the island. Over the past 5 years, the school roll at Westray Junior High School has increased from 60 to 90,” explained Richardson. “Our newest organic sites off Stronsay created 5 new seawater jobs which have brought a much-needed economic boost to the island.”

“I love the thrill of working for a company that is doing so well, sending beautiful salmon all over the world, especially the organic salmon we raise in Orkney,” says Ken Laird, Processor and Maintenance Assistant at Cooke Aquaculture Scotland. “We need to shout out more about how good it is. Young people getting a job in aquaculture really have won the lottery.”

As well as paying staff salaries, Cooke poured £18.27 million during 2016-2021 into the Orkney economy by investing in farms, buildings, the Kirkwall packing station and spending with local businesses such as Roving Eye Enterprises, Malakoff Ltd. and others working in transport, net and boat repairs, diving, fuel and consultancy.

“These local benefits will grow even more should Cooke Aquaculture Scotlands’ planning application for a new offshore 6-pen farm called East Moclett be approved later this month. It is proposed to be located to the east of Papa Westray and north of Cooke’s first offshore farm at Skelwick Skerry. The East Moclett farm would add 6 new jobs and be serviced out of Cooke’s Westray shorebase. At 2.9 km offshore from Papa Westray, the farm is not expected to have any significant visual impact, and no issues or objections have been expressed from any statutory consultee or regulator,” said Ben Johnson, Environmental Development Manager for Cooke Aquaculture Scotland.

The proposed farm at East Moclett has been fully assessed by the Scottish Environmental Protection Agency (SEPA) and all required modelling and data collection has been undertaken. SEPA has raised no issues or objections to the site.

Cooke is part of the social fabric and has a role in making great places to live, grow up and work. In response to what people wanted, the company has supported a wide range of activities and organisations, from the Hoy Half Marathon to Stronsay Community Hall to Westray Junior High School to Stromness Museum to Orkney Young Careers to food banks. Cooke community donations and support in Orkney from 2016-2021 has totalled £267,714 for music/culture, education, health/social care and sport.

“We aim to continue to farm with care – to ensure long term social, economic, and environmental sustainability of Orkney and the Northern Isles,” explained Richardson. “Cooke’s core purpose is ‘To cultivate the ocean with care, nourish the world, provide for our families, and build stronger communities’ and our approach to sustainability is central to this.”