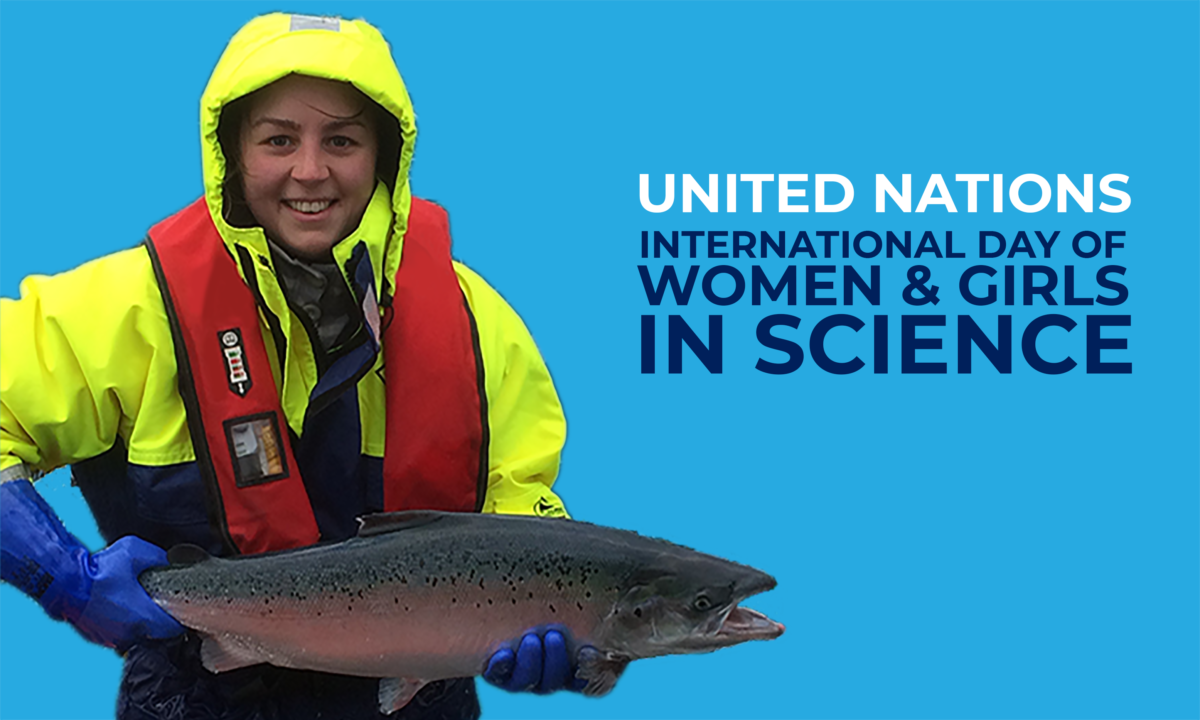 Aquaculture is underpinned by science which enables us to rear Scottish salmon maximising fish health and welfare while protecting and enhancing the marine environment in which they are raised.

At Cooke Aquaculture Scotland many of the people applying this science are female. We celebrate the role women play in our company, and share some of their stories on United Nations International Day of Women and Girls in Science.

“I’ve always loved fish,” says Ola. “My Dad tells a story about me as a five or six-year-old demanding a goldfish and screaming the place down until I got one. Now he tells everyone that he is the reason for me working in fish health.”

As a Fish Health Manager at Cooke Aquaculture Scotland, a typical week sees Ola visiting different seawater and freshwater farms to ensure the health and welfare of our fish. 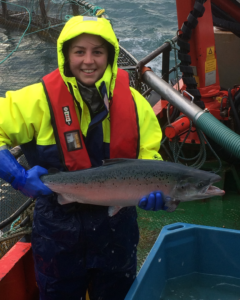 “Our core business is about producing the best farm-raised Scottish salmon, we take great care in looking after our fish, from the day-to-day husbandry provided by the freshwater and seawater teams, to the strategic health, welfare and nutrition plans that we devise to make sure that our fish thrive in their freshwater and marine environments.

“My role is very varied – there’s the hands-on fish inspections, but I also spend a lot of time speaking to the site teams, coordinating veterinary health and welfare plans, and take part in numerous projects all geared to improve the health and welfare of fish.”

Ola graduated from Glasgow University in 2010 with a degree in Marine and Freshwater Biology.

“I applied to do a degree in virology but in first and second year it covered a wide range of general life sciences’ subjects. In third year I decided that I wanted to switch to the marine and freshwater biology degree and completed modules in marine and freshwater ecology, aquatic environments, aquaculture, and animal behaviour, welfare and physiology. I was really lucky to get to go on fields trips to places like Egypt, as well as sites closer to home like Loch Lomond and the Marine Biological Station on Cumbrae.

“After I graduated I was working part time and got the opportunity to do some work experience at Cooke Aquaculture Scotland, and applied and got the fish health co-ordinator role. I was in the right place at the right time.”

With eight years’ experience under her belt, Ola was promoted to the role of fish health manager in 2018. During this time she saw the company and the aquaculture sector grow significantly.

“I am quite lucky that I ended up in a job related to my degree as it wasn’t particularly specialised. Over the course of my career the size and scope of my role has grown which has kept things fresh and interesting but also challenging for me.

“Aquaculture is a male-dominated industry and often I am the only woman in a meeting, but I don’t remember ever feeling that this is an issue.

“It is a welcoming industry and one with really good and varied career prospects – not just on the farms, there are so many technical and health support roles.

“Women are playing an increasingly important part in the sector, especially in the science of salmon farming, and I’d encourage more women to come and work in aquaculture.”

“I’ve never come up against anything that made me feel that because I am a woman I can’t do something” says Rhona Robertson, a Lab Co-ordinator in the fish health team at Cooke Aquaculture Scotland.

“I loved biology at school and wanted to work in a lab and do research. My former biology teacher – Mrs Maisie – probably did more than most to nurture an interest in science and encourage me to pursue a science-based career.

“It was either science or music, and science won (just!).

“At university the majority of people studying my course were female, and in my previous role supervisors and managers were all female. Maybe I’m lucky I’ve never had to overcome the barriers that some women do”.

After graduating with a degree in Biological Sciences from Glasgow Caledonian University Rhona worked for several years gaining skills and experience working for a contract research company in Stirling.

After moving to Argyll she was recruited by Cooke Aquaculture Scotland in April 2014, initially working at Furnace Hatchery and Smolt unit came up doing daily water quality testing and then gradually moving towards fish health and in-house diagnostics.

Rhona spends most days in the lab-based, running routine lab tests to make sure our salmon are healthy. A couple of days a week she will complete site visits to check the health status of the fish. She is supports Cooke’s involvement in several collaborative projects with universities which involves work on a weekly basis.

“I love that the role I am in allows me to work in the laboratory as well as getting out and about to visit our fish farms – it’s the best of both worlds. Getting to work with industry and academic colleagues on innovative research projects is another added bonus.

“Aquaculture is an extremely diverse industry and any science degree would stand you in good stead for a good career in the sector.

“My role is very hands-on and my best piece of advice to girls or young women thinking about a career in science would be to take a course that is applied – that way, when you leave university you’ll have the hands on practical skills that employers are looking for, and means you can apply for a much wider range of jobs.”

“Salmon farming is such an integral part of the community where  I live in Orkney, it is easy to talk about in this kind of environment. Yet, in other areas of Scotland and the UK, there is so much about food production that people separate themselves from so it is harder to appreciate where food is coming from and how it is produced.”

“When I was at school science was sitting on wooden benches with Bunsen burners and singed eyebrows” admits Naomi Dempsey, Environmental Analyst for Cooke Aquaculture Scotland.

Naomi’s career path into science wasn’t an obvious one. She completed an undergraduate degree and then went on to do a PhD in archaeology at Aberdeen University. But during this time at university she found she spend increasing amounts of time focusing on applying scientific techniques and analysis to her research.

“As I got older I developed more of an appreciation for science in action – how it could be used to explain things rather than just the theory. My postgraduate degree included lots of elements of geophysics, soil microbiology, carbon dating and macrofauna analysis which are all relevant to understanding past human activity. These research techniques really developed a strong interest in the science side of archaeology and what it contributes to our understanding of history.”

After leaving university she worked on environmental impact and risk assessments, using many of the skills and experiences she had gained at university, before joining Cooke Aquaculture Scotland in 2014.

Her role is hugely important to the quality of fish produced at Cooke’s seawater salmon farms in the coastal waters of Orkney and Shetland, taking samples to monitor the health of the seabed and the marine environment, and using hydrographic and water chemical data to understand their effect on how fish are reared and the environment they are farmed in.

“It’s really important about how we can use science now to produce responsibly-sourced salmon. This is core to how we do business as a salmon producer, and it contributes to the UN’s sustainable development goals, especially goal 14 on conserving and finding sustainable uses for the seas and oceans.

“I love my job. I’ve not had a conventional science career, but my advice to girls thinking about a job in science would be to take every opportunity that you can and bolster whatever you’re doing academically with real workplace experience or volunteering as it will help you to demonstrate the skills you need to get a headstart in your career.”

For all media enquiries please contact Ann Cockerton, Communications Manager on +44 (0)1856 876101 or ann.cockerton@cookeaqua.com.